It’s been 11 months since having our second child and I thought it would be nice to share how it’s been going!

First, you see those faces?! I adore them!

My children, a boy and girl, are 19 months apart. My daughter was born last February and my son was born two Junes before that.

Really, he was also a baby when she was born.

But quickly, oh so quickly and yet at times slowly, he’s becoming a little boy.

When we brought “baby” home from the hospital, we dressed her in an adorable pink furry bear onesie.

This may not have been the best choice, as he tried to pick her up like his favorite teddy bear and I realized our mistake. 🙂 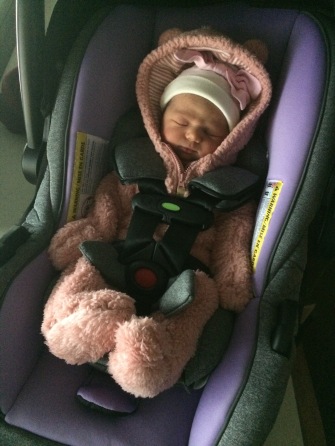 I remember those first weeks and leading up to it, wondering how on earth we could care for both kids.

We put some things into place and basically Daddy began to take over in some areas that freed me up to rest before she came and start to carve out a new normalcy of mama not always being available.

I also started to really take time for cuddles each day with my firstborn and that would continue after the baby got here. For us, it was watching Peppa or other shows. It’s still a great time for cuddling and nowadays I love being there with him so he can interact with me as he learns things on a show. Lazy parenting, whatever! Life-saving & a good break at times!

Now that I had two kids, I found myself reticent to go out. It would just be a bit before I could figure out how to do it safely- I’m guessing any parent with two smaller kids has to get the hang of it.

Something that has been tough is that we’ve been waiting for our oldest to talk clearly and make his needs known for a long time. I thought he’d be able to speak in English for about a year and a half before it just started to happen recently at 2.5 years old!

I remember the scariest moment when I braved going to the park with both of them and he ran into the street. I thought I would faint but determinedly ran after him and got him, while needing to leave my baby in her stroller. It was so stressful and it took me a long time to get up the nerve to try it again! I decided to wait until he could follow directions and we are still working on that.

So this past almost year, we have stayed home and opted for a daycare program that was a few mornings right after Eilah was born and then another one that’s only one day a week more recently. It’s been a great thing for our family!

In my opinion, there’s nothing wrong with togetherness and being safe and then venturing out when you know it’s smart to do so. If you know me, I LOVE ADVENTURE!

Our son has been to 10 states, most of those in his first year of life. But we’ve chosen to stay home a lot more once our second arrived, just to give time to adjust to this major change for not only us, but also our 2 year old.

We have since traveled twice and both were great experiences!

I think the key to a great trip is to do it with family, if possible because everyone loves spending time together and it takes the pressure off to know that grandparents are enjoying being with their grandkids and caring for them. It’s just the best! I remember traveling last year at 3 months pregnant and solely with my 13 month old to a family beach vacation with my large Italian family. There were so many people to love on him and look out for him and it was still exhausting but so enjoyable. I’ll never forget my brothers and cousins being happy to hang with him while I went swimming in the ocean. Delicious freedom!

So fast forward to this morning with two kids.

It was the day of the week we needed to get up and out to drop him off at his daycare experience.

I was trying to fight off the familiar feelings of stress and feeling disappointed in myself for not getting it right.

It’s been really hard to get him up and out lately and I didn’t want to start the new year in the same frame of mind.

He tantrums every single time.

Right now tantrum triggers are anything to do with being told what to do and having to do it in a timely manner.

Our past 3 times, we were so late even though we started getting ready an hour ahead of time. The very last time before break, it was 30 minutes! Ee!

So, this morning, I did NOT want to repeat that!

I decided I would make his lunch the night before to get that out of the way.

I’d wake up early and get an hour of work done so I didn’t have that in the way.

Check. Check! It was going well!

He threw a tantrum about getting his fleece pullover on, normal. (He’d already thrown a small fit that involved a dirty diaper and we successfully got through that while keeping everything clean so I was like, we will DO THIS).

Daddy (my back up:) ) left for work and we were still on time and it was shoe time.

I gave him a choice and to my delight he said, “boot doe”. Doe is his word for shoe and this was his first time saying boot! He thought it had to go with shoe, so cute!

And my goodness, was this the first time ever he has SAID an opinion or preference?! My eyes tear up just thinking about how long I’ve waited for that!

I put Eilah in her baby carseat and we all 3 happily began going down the stairs to the door.

We stepped outside as my 2 year old stunned me again by chatting about the birds and wanting them to come back and saying “birds, fly!” It was wonderful!

Then reality came crashing through me as I realized I had forgotten my purse with not only my driver’s license but also my fob.

How could I have forgotten that? And my phone was in our home.

My husband was hopefully coming as back up to help us load up, but it was cold and we couldn’t just wait.

It dawned on me that all this joy and ease was about to get difficult.

Two steps forward, one step back. That has truly been this whole year as a mom of 2.

I think being a parent of two little ones gives an invitation for intentionality. Whenever a movie pops on, I still have a hard time sitting down and staying still. For me, movie means time to clean up the home & get things done while the toddler is entertained and the baby doesn’t need to nurse, go down to sleep, etc! It’s a bit embarrassing- especially when my sister is over and we are supposed to be enjoying it together and I just go to the kitchen and start unloading the dishwasher!

So, yes, my 2.5 year old did not understand why we had to step back inside. He cried so hard all while I was explaining it to him every step along the way. Even the baby started to cry (she doesn’t cry often!) I tried not to cry, myself. I fought off the feelings of disappointment in myself for not being perfect and at the same time, felt determined that we could still make this all happen and be on time for his class.

I ran up, got the purse, ran down and when he realized we were going back outside and to “our-car” (He says it like one word), he was instantly back to being happy. I was glad I held onto happy, too.

We got to his school and he just started quivering as soon as he recognized it. Not because it’s scary, but at the same time, it is at his age sometimes. He feels all the feels like one live wire. I took it slow, took him out and held him and tried to form a plan.

His school involves stairs, so I learned early on that I can’t keep the baby in her stroller. I’ve tried everything. I’ve carried her in a carrier and ended up carrying my 2 year old at the same time. That’s a wild experience.

Today was even harder. Why did I think doing my arm day workout was a good idea before this whole deal?!

I decided to carry her in her carseat and carry him, as well. Idk but I think that was like 50 pounds. I was staggering and pushing forward with everything in me.

A lady was like, please go ahead and I was like, uh, I can’t. Thankfully the greeters came and helped and held Eilah in her seat while I helped him transition into his class.

Whew. So yeah, that’s an example of what it’s like being a mom of 2. Just the practical real life-ness of it.

We’ll have many years of going out to parks and on adventures and it’s okay that the first year was more quiet.

Would you be interested in tips on how to enjoy being at home with 2 kids, doing educational activities and having them practice self play? It’s been amazing for being a work at home mom! I think I’ll do a post about it soon. My next one will probably be my daughter’s birth story. It’s kinda neat because it was a hospital birth, after having a homebirth the first time around! I loved both for different reasons. I was ecstatic about both for different reasons. And I’ve absolutely treasured her birth story in my heart for the past year. What a gift it was to me and to our family!

I'm Ailene! Here to encourage you, friend! A girl full of dreams, a mom of 2, a wife & a daughter of God. I write to be courageous and to inspire courage. View more posts